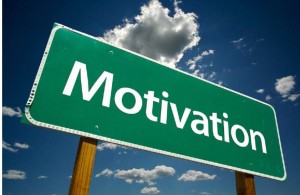 How To Stay Motivated

Having some trouble staying motivated at work? Do you ever wonder why your veering off course and can’t get stuff done? We found the reason and how to fix it. One of our favourite blogs, Barking Up the Wrong Tree, breaks it down for you:

1) This Is Why You Don’t Feel Motivated

You’re probably thinking too much about the rewards involved. “I want the promotion” or “I want the ‘A’ on the exam.”

You might be enthusiastic about the “carrot” or afraid of the “stick”, but you’re just not excited about doing the task itself.

Rewards like money are tricky. They are definitely powerful, especially in the short term.

Here’s Dan: “What’s really clear is that “if-then” rewards are really good for simple behavior and short term behavior, definitely. So if you want people to do something really straightforward, like stuffing envelopes or processing papers, and you want good performance during the short term, then rewards work pretty well.”

But looking exclusively at rewards doesn’t work over longer time horizons or for complex tasks. We inevitably take the pay raise for granted, and if we’re still not excited about the task — boom — we’re less motivated again.

Here’s Dan: “If-then” rewards just don’t work very well for complex, creative tasks with a long time horizon. It’s not like we don’t like rewards. We love rewards. They get our attention. But they narrow our field of vision.”

We all want money. (Good luck getting people to show up at work if you stop paying them.)

Rewards are essential — but they’re not everything. We all know well-paid lazy people. And we all know people who enthusiastically engage in hobbies (which can look suspiciously like “work” to outsiders) for free.

So rewards just motivate us to get rewards. They don’t make us care about the task at hand. Which raises the obvious next question: How can you make yourself care?

2) Here Are The 3 Things That Motivate You

Dan’s found three things in the research that go a long way toward getting us motivated (assuming we’re already paid a fair amount.) Remember “AMP”:

Let’s break them down.

Autonomy means we don’t like being told what to do. Once we feel we’re being pushed around, we check out.

This is why kids might like puzzles but hate homework. They’re both problem-solving but only one has people nagging you about it. Similarly, nobody has ever said, “I love a micromanaging boss.” A lack of autonomy kills workplace engagement.

Here’s Dan: “Autonomy is, “Am I directing my own life, rather than being directed?” Autonomy is simply self-direction. Giving people some sovereignty over what they do, when they do it, how they do it, where they do it, who they do it with. To me, it’s the secret in the workplace of engagement.”

We just naturally like getting better at things. This is why video games have rankings, levels, and points. They say “You’re improving” and that feels good. Here’s Dan:

Mastery is, “Am I getting better at something that matters? Am I making progress in something meaningful?”

But the workplace can be just awful at this. Candy Crush and Call of Duty immediately tell you if you’re getting better. Yet at work you get an annual review. See why one is addictively fun and the other can make every Sunday night so sad?

Kids are expensive, time consuming and often difficult to deal with. I suggest you sell yours to the highest bidder immediately. Are you religious? Patriotic? Loyal to friends and family? Sounds like a lot of obligations. Get rid of all that baggage right now.

Sound crazy? Of course it does. These things provide purpose to our lives and purpose is immensely valuable to all of us.

Here’s Dan: “Purpose is, “Am I doing something in service of a cause larger than myself, or, at the very least, am I making a contribution in my own world?”

In the time since his book Drive came out Dan has a more refined view of purpose. There are 2 types:

Here’s Dan: “Since the book has come out I have a more refined view of this too. Capital “P” Purpose, is “I’m working for a non-profit and we are devoted to protecting endangered species.” or “I am working as a surgeon and I am saving people’s lives. I’m doing something to serve a cause larger than myself.” But there’s another kind of purpose that I didn’t really explore enough, which is what you can think of as purpose with a small p: “Does my piece matter? If I didn’t show up today at work, would anybody care and would things be worse? Would I be missed because what I’m doing actually makes a contribution?” I overlooked that in the book.”

Again, many workplaces can be a mess here, too. Whether it’s saving lives or just making a material contribution at work, we don’t often see the results we create.

Wharton professor Adam Grant did an amazing study where he created a huge spike in motivation at a university call center without spending a nickel. His secret?

He showed the employees letters written by grateful students who had received scholarships due to their efforts. They heard the difference their work made in young people’s lives. And their motivation soared even higher when the students were brought in and said thanks in person.

Via Give and Take: A Revolutionary Approach to Success:

When callers interacted with one scholarship recipient in person, they were even more energized. The average caller doubled in calls per hour and minutes on the phone per week. By working harder the callers reached more alumni, resulting in 144 percent more alumni donating each week. Even more strikingly, revenue quintupled: callers averaged $412 before meeting the scholarship recipient and more than $2000 afterward.

So maybe you’re a total motivational rockstar and you make sure to find a situation where you have autonomy, mastery and a deep sense of purpose.

Even if you have the three tentpoles, what keeps you going day to day? What gets you through the rough patches?

3) The Most Motivating Thing Of All

Teresa Amabile‘s research at Harvard found that the most motivating thing is progress in meaningful work.

What’s fascinating is that this is so powerful that the mere illusion of progress is enough to get our engines revving. Seriously.

But that’s not how the recipients saw it. The “buy 12″ group bought coffees a lot faster because they felt they had made more progress toward the goal. Merely thinking you’ve made progress can get you motivated.

But sometimes it feels like you’re just treading water. You may have goals but it’s hard to see progress. What do you do then?

Goals are great but big ones are abstract, far away and sometimes hard to relate to. And it can take months or years to achieve something big.

The secret is small wins. Those little achievements you can see day to day. Anything that went well or worked out. Don’t take that good presentation or minor achievement for granted. That’s progress and paying attention to those can keep you trucking when you’re feeling less than motivated.

Here’s Dan: “Over the last several years of writing about this stuff I have kind of moved away from the whole moonshot, big hairy audacious goal approach, and much more towards the small win approach. What I like about small wins is they can cascade. One can lead right into another. Charles Duhigg has a very, very nice term for it, which I think is important. He calls them “keystone habits.” And you know Peter Sims has written about “little bets.”

And the science is with Dan. Teresa Amabile‘s research at Harvard backs him up.

Some of you may still be skeptical. Or feel these strategies won’t work because of what an exquisitely special snowflake you are.

And maybe you’re right. So let’s take the biggest step of all and tailor this for you.

5) Ask What’s Meaningful To You

What’s really important to you? Yeah, you.

The students who were intrinsically motivated, who were doing things because of internal reasons, bested the other two groups — and were the most satisfied. That’s happiness and productivity.

Ironically, it is often by being true to yourself and not thinking about rewards that you get the rewards and esteem you want.

Here’s Dan: “So there is this kind of interesting zen-like thing. The route to these rewards is not to be cognitive of the rewards. What was so compelling about this West Point study was that they had a very, very, very large sample. A full decade of West Point graduates that looks at and measures their attitudes going in and then objective measures of what they did afterwards over a very long period of time. That’s what is so compelling about it.”

Feeling a bit more motivated? I’ll leave you with this great quote from Neil DeGrasse Tyson:

“The problem, often not discovered until late in life, is that when you look for things in life like love, meaning, motivation, it implies they are sitting behind a tree or under a rock. The most successful people in life recognize, that in life they create their own love, they manufacture their own meaning, they generate their own motivation. For me, I am driven by two main philosophies, know more today about the world than I knew yesterday. And lessen the suffering of others. You’d be surprised how far that gets you.”